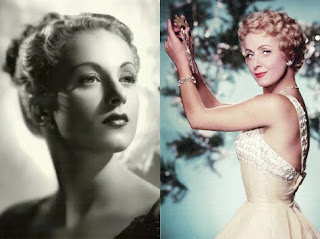 What a glorious, elegant film Max Ophuls created in THE EARRINGS OF MADAME DE! 1953 found the director between two stunning films: LA RONDE (1950) and LOLA MONTES (1955), but this film perfectly expresses Ophuls’ mastery of the camera and his expression of a woman’s spirit, for which he is rightly celebrated. At one time, his genius was unappreciated; he was called a mere stylist and overly concerned with visuals. His films are exquisitely beautiful, yes; this one features a woman of surpassing grace and loveliness: Danielle Darrieux, still a working actress, now in her 90s.


Darrieux’s Louise is a foolish woman, but very fond, and as such, her life is all sentiment while her husband, the General, (Charles Boyer) is sentimental about only one thing: his beloved wife. She has every material pleasure: the opening sequence is a superb example of Ophuls’ craft. A slender gloved hand caresses each of her possessions in a sumptuous closet – the lady has a dilemma, and there our story begins. Like Emma Bovary, Louise spends too much, but her heart is free. Her world rather anticipates and expects that a woman will have dalliances, but love will be her undoing. Mary Ann Doane astutely points out that the adulterous woman, Ophuls’ definitive character, “does not presuppose that the protagonist is characterized as villainous. Rather, her sexual deviation from a norm is usually quite clearly socially imposed. A rigorous and unrelenting social order governs her options…Hence the spectator is persuaded not to castigate the woman but to sympathize with her…” (Doane 129).

It is strange indeed that this film has been, like all Ophuls’ films, rather neglected. The restoration by Janus Films has long been hoped for by the devoted among the critical establishment: David Thomson writes very passionately about his discovery of Ophuls as a young student viewing LOLA MONTES. He states,” …Max Ophuls is one of the greatest of film directors. He is frivolous only if it is frivolous to be obsessed by the gap between the ideal and the reality of love” (Thomson 668). And I think this quote by J. Hoberman of The Village Voice is particularly wonderful: “He taught the camera to waltz, often through a 19th-century city that, no matter its name, seems a glittering simulation of the Hapsburg capital.” As the camera swirls and glides, we see why he also describes Ophuls as a Viennese, with a charm and sophistication that characterizes all his films; the director was actually a German who made films in France, then the US and back again, not unlike his fellow and kindred spirit, Jean Renoir. While both men’s American films were respected, it is his last, greatest French films which command our attention.

Again, from Hoberman, who, along with Pauline Kael, Richard Roud and Andrew Sarris is a great admirer of this film:

"Has there ever been so shallow a character whose fate is so tragic? Playing opposite two aging matinee idols, Darrieux is a natural coquette—not above strategic fainting spells—and undeniably lovely. With her upswept hair, bare shoulders, and impeccable posture, she blossoms from her gown like a single tulip in an Art Nouveau vase. Ophuls famously directed Darrieux to "incarnate a void," and one of the movie's great shots makes this literal (and also emphatic as, rather than moving his camera, Ophuls employs the motion of an object within the frame" (Hoberman). I take issue, though, with Hoberman on one thing: she is undeniably the flirt and a spendthrift, but love transforms Louise: consumed by longing, watching her passionately kiss the earrings, much traveled and traded, is to see her fully alive at last, even as she sickens and literally dies of heartbreak.And those diamond hearts, now under glass on the saint's altar where she left them as a plea for her lover's life, are no longer trafficked, but like their owner, made sacred.


I can't believe a year has gone by since I last posted. I'll do better this year...


For the Love of Film!
Don't forget to contribute to the Blogathon! You can contribute here:

Labels: Danielle Darrieux, For the Love of Film Blogathon, Ophuls