Ophuls in Hollywood: THE RECKLESS MOMENT 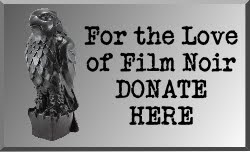 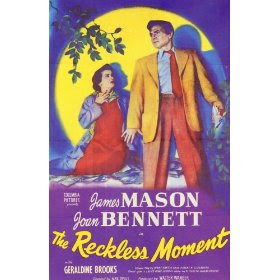 I confess to a mad passion for James Mason, and Joan Bennett was underrated and underused. Just saw her in the fantastic Lang WWII thriller Man Hunt, and she was terrific.

Max Ophuls’ 1949 film The Reckless Moment shows us the world of a decent, conventional woman, the 40ish, still lovely but buttoned-up Joan Bennett, she of the smoky, commanding voice, and attacks the sense of security living there. The scene is Balboa, California of long ago. What is sunnier than a beach house? This little piece of suburban Eden is dark indeed. There is a snake in this Eden, Ted Darby, a shifty “ex-art dealer” who is exploiting Bennett’s precociously pouty adolescent daughter, Bea. Into the fight strides Lucia – and her descent into the underworld is every bit as momentous as the journey that Demeter makes to ransom Persephone from Hades. The night world of Los Angeles is marvelously set out for us to enjoy as the camera follows Lucia past sleazy operators and the tackiness of the come-on, as the business of the neighborhood is vice: pawnbrokers, loan sharks, bars etc. It’s a costly journey, as we shall see.

Ophuls’ focus was ever on women, especially the fallen woman, as one of his most well-known films, Letter to an Unknown Woman, illustrates. The lush, romantic, yet doomed ambiance of that film is more obvious, but even the spare The Reckless Moment is passionately intense. It is a precise, tight little film, like a coiled spring.The late and lamented critic Robin Wood was a strong advocate, placing this film on his own “top ten” list in the British Film Institute’s 2002 poll.

In her perceptive study, The Cinema of Max Ophuls: Magisterial Vision and the Figure of Woman, Susan M. White observes:

“Robert Lang has correctly described The Reckless Moment as a critique of the patriarchal family. Like Mildred Pierce (1945), this film lies at the juncture of several genres, notably the family melodrama and film noir, both of which it exemplifies in visual and thematic terms.”


White has made a strong case for Ophuls’ identification with his women, and that would seem true here. Lucia is tense, chain-smoking and paces about – she acts courageously to protect her family and her weakness is in that attitude, as she is ensnared in a web of her own bad luck. Into this very noirish environment comes James Mason as Donnelly, an “Irish racketeer.“ The soft accent marks him as different, an unexpected and unlikely addition to the fatherless household of Lucia’s always absent engineer husband Tom. A tarnished angel himself, he is at first menacing, then something else again. His relationship with Lucia will have many twists and turns. The feline, elegant Mason is letter-perfect as always. Donnelly invades Lucia’s home, becomes part of her deadening maternal routine, grafted awkwardly onto her family as they draw ever closer to each other. His star on the rise, Mason had personally requested Ophuls for this project, as his contract stipulated, and it was a very fortuitous choice for both of them. Bennett was the choice of the producer, Walter Wanger, not the director, as she was married to Wanger at the time. Later, the two of them would have their own scandalous incident, the 1951 shooting of Bennett’s agent, whom Wanger believed was involved with his wife. He was imprisoned for a term; her career never recovered.

The original version of the story, the short suspense novel, “The Blank Wall” started life as a short story in the Saturday Evening Post, and along the way attracted the admiring attention of Raymond Chandler and Alfred Hitchcock. Author Elisabeth Sanxay Holding’s work is now recognized for its excellence and originality but unfortunately, she never lived to experience that recognition. Similarly, this film was remade in 2001 with Tilda Swinton as The Deep End. However, this film has a stronger reputation, despite being rarely seen. The beginning did not seem auspicious: Its first preview screening was a setback from the start, necessitating strategic editing and artistic trade-offs:

The preview of the film was a disaster. Columbia took the print to a suburban theater where everything went wrong. The picture broke and several minutes were taken to splice it. Then, when the movie began to unreel, the sound track and the picture were out of synchronization and the words didn't match the lip movements. By the time they re-synched the movie, half the audience had left and any suspense that might have been generated was lost. (TVGUIDE.Com)

Despite all the squabbling over art and commerce that commenced between the director and the producer, Wanger and Ophuls managed to forge a working relationship. Lutz Bacher’s excellent work, Max Ophuls in the Hollywood Studios, describes it this way:

“According to Mason, Ophuls agreed with a common assessment of Wanger “as a man who talked good pictures and made bad ones as a general rule” while Wanger worried about Ophuls’ artistic ambitions resulting only in succes d’estime. “’ Writer Robert Soderberg believed that Max Ophuls was trying to make an American picture, hoping to find success in Hollywood, which he had not had up to that time. There was a feeling that his camera work was too arty, too unconventional. In his writers Ophuls had two experienced professionals: Soderberg and Hank Garson, the authors of a sly satirical CBS radio program, “Junior Miss.” They proved to have a good hand with this melodrama, which is a classic “lady in a jam” film. Ophuls was also a very thoughtful director who befriended his writers and attempted to get his way without pushing, typically offering encouragement and suggestions. Soderberg described it as a “sunny experience.”

Generally, the set of The Reckless Moment was a typically Ophuls one in its professionalism, speed and European approach: warmer and more personal, with a distinct flair for vivid camera work, which James Mason celebrated in this little verse:

“A shot that does not call for tracks, it is agony for poor dear Max,
Who separated from his dolly, is wrapped in deepest melancholy”


For the Love of FILM NOIR!

Time to Donate to the Film Preservation Blogathon:
Posted by Mary Hess at Saturday, February 19, 2011